Picture that shows how clean Singapore is. Taken from http://www.tripadvisor.com.sg/Guide-g294265-i13715-Singapore.html

But I think people will change their mind when they see Singapore’s coastal areas, such as Pasir Ris Park. There are actually quite a handful of trash in there.

As mentioned in the one of the earlier posts, plastic and other kind of rubbish are physical water pollutants! In this post today, I shall explore more on the harms these seemingly harmless rubbish can do to our environment while using Singapore as a case study.

Firstly where does all the litter come from?

Marine trash in Singapore could come from the following sources:

Illegal disposal of waste into the sea from fish farms

Illegal dumping of waste into the sea by companies and ships

Litter in the canals and drains leading to the sea

Littering by beachgoers involved in activities such as cycling and bbq-ing.

Waste blown away from premises at the beach or due to improper disposal by the premise, including chalets, bicycle shops, cafes and restaurants, food centres, and convenience stores

So what are the harms that this marine litter bring?

Marine litter can result in the entanglement of animals. Those get entangled die a slow death. For instance, crabs can be trapped in fishing nets that have been abandoned.

Photo showing horseshoe crab being trapped in a fishing net. Taken from https://otterman.wordpress.com/page/126/?viewType=Print&viewClass=Print

Ingestion of marine little as they are mistaken as food and as a result, lead to starvation and eventually death of the marine animal. For example, sea turtles often mistaken plastic bags for jellyfish and end up eating plastic bags.

Plastic, which is a very common form of marine trash do not biodegrade. In other words, they are in the marine environment forever. In addition, plastic can break up/fragment into smaller pieces. This means that the plastic is made available for consumption for a wider range of organisms. Such a scenario can lead to the transfer of toxic chemicals to wildlife.

Marine litter is created by us. We are polluting our coastal environment and I think we should do something about it.

Here are some things WE can do to make a difference, to save a marine animal from ingesting that plastic bag or being trapped in the fishing net.

Dispose all rubbish properly in dustbins

Reduce the use of disposables

These are the things that one can do on the individual level. However, I believe that individual effort is not enough to salvage the situation. The government plays a important role too. I tried to look for information on current governmental measures to deal with marine trash and I am disappointed to find out that there was no websites on it. (Try it if you don’t believe me!)

But I managed to find a website which identified potential barriers that prevent Singapore from solving the problem of marine trash and also gives constructive suggestions to help mediate the situation. Let’s take a look at some of them.

Even though the National Environment Agency (NEA) is in-charge of clearing waste from public beaches, drains, waterways, and coastal parks, there seems to be no government agency in charge of working with the various agencies to set holistic policies to reduce marine trash.

I agree with this. As mentioned earlier, I tried to research on current measures that Singapore government has to address the problem of marine trash and there was none sadly. Sure there are measures to address solid waste disposal but maybe more can be done for marine trash specifically.

There is no door to door trash collection for fish farms currently, resulting in the owners of fish farms dumping waste into the waters. According to WildSingapore, approximately 250 tonnes of trash (or more) will no longer be dumped into our waters every year if the trash collection service is provide for the fish farms. Clearly, a possible solution would be for the government to provide the service to the fish farms.

Marine trash at mangroves are out of sight

I agree with this point. I was actually not aware of the problem – that there are marine trash at the mangroves until I learnt about it in class last semester. It is like a “out of sight, out of mind” situation for many Singaporeans (& I was one of them last time). Without seeing the marine trash at the mangroves, people would not be aware of the problem and consequences of their action, such as using too much disposables or littering for the convenience of it.

Similar to the previous point, I myself did not know how severe the problem of marine trash could be in the past. Sure, I do know that our beaches are not as clean but I did not know about the harms until recently when people talk about it and I learn about it through research.

A good example would be people not knowing that balloons can actually cause harm to marine life. I myself never knew that too previously, I just thought balloons are pretty and fun to have especially for outdoor parties and gatherings. Balloons, when deflated, can find their way into the sea. When that happens, it would be deadly for the marine animals such as turtles who will very likely mistake the balloons as food.

In fact, last year, National Technology University (NTU) club planned to release several hundred of balloons at a Marina Barrage charity event. This further shows that there is a lack of awareness among people. Luckily, NTU club decided to pop the idea after some environmentalists voiced out their concerns (about turtles eating the deflated balloons).

So yes, more public campaigns would definitely help increase awareness among people in Singapore and that could help reduce the amount of marine trash greatly.

In addition to the balloon situation, perhaps there should be a rule at coastal areas which prohibits beachgoers from bringing balloons there so as to reduce the chance of them becoming food for the marine animals.

I certainly hope that more attention will be given to this problem of marine trash in Singapore – for the government to enforce laws on illegal dumping and provide trash collection service for all industries and sectors and for everyone to be aware of the situation and to do their part in ensuring that their trash do not find their way to the coastal areas as those trash can kill. 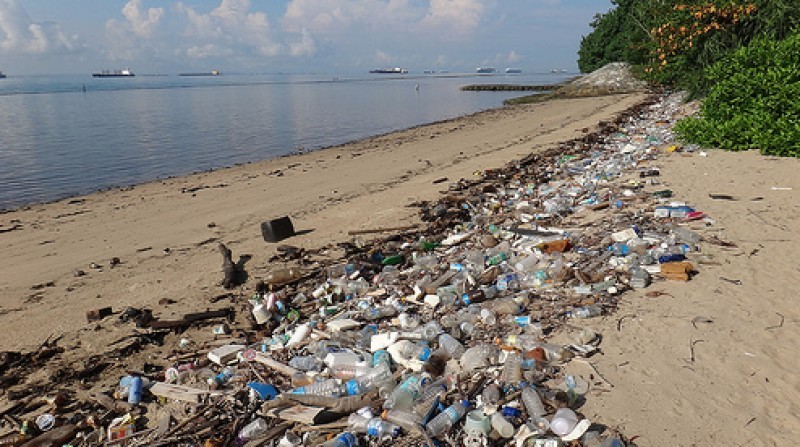 Singapore always prides itself as a clean and green city and many actually agree.