Shark Week has become a TV staple since it first debuted in the 1980s. Now the frenzy is spreading at 35,000 feet.

For the third year in a row, Southwest Airlines will join the fray by rolling out shark-themed designs on its Boeing 737 aircraft.

In previous years, Southwest had given just one of its jets a shark-inspired look. This year, five Southwest 737s will get a shark makeover. Each plane will feature its own species of shark.

The aircraft still show Southwest’s typical paint scheme, but an image of circling sharks and a 30th-anniversary Shark Week logo will grace the nose of Southwest’s five Shark Week jets.

The special liveries debut Monday and will fly on the jets through Aug. 31.

In another new twist, Southwest has partnered with flight-tracking service FlightAware to let aviation (and shark) enthusiasts track the shark-themed jets on FlightAware's website.

Southwest is encouraging both “customers and aviation enthusiasts to share their plane-spotting photos of our Shark Week Fleet with @SouthwestAir using the hashtag #SharksTakeFlight.”

Southwest says the partnership with Discovery Channel helps the carrier draw attention to its aircraft and in-flight entertainment, which will feature Shark Week content during the promotion.

“Entering our fifth consecutive year of partnership with the Discovery Channel, we are thrilled to celebrate Shark Week’s 30th anniversary in an even bigger way by launching an entire fleet of Shark-themed aircraft and premiering a Shark Week episode onboard our flights, letting our Customers have the first view of Shark Week content,” Southwest spokeswoman Brandy King says in a statement.

Southwest Airlines unveils special shark designs on its aircraft as part of a Shark Week partnership. Seen here is the 'Hammerhead' livery, one of five rolled out by the airline. 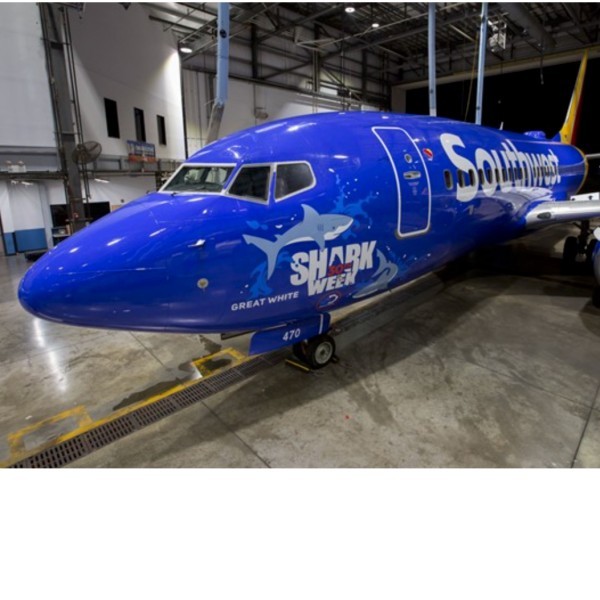 For the third year in a row, Southwest Airlines will join the fray by rolling out shark-themed designs on its Boeing 737 aircraft.