Sure, you can soar or swim in VR. Just put on a headset and jump in a pool.

A smartphone and a snorkeling mask are two of the key parts of a prototype virtual-reality headset that works underwater.

No matter how well virtual reality mimics the sights and sounds of flying, floating, or swimming, it’s impossible to feel that you’re really doing those things when your feet are planted firmly on solid ground. So Stephen Greenwood and Allan Evans are making a VR headset that you can wear underwater.

Greenwood, director of creative development at Discovery Digital Networks, and Evans, cofounder of headset maker Avegant, started working on it in December after talking about what it would be like to combine an isolation tank—where you float in a dark, silent room, alone—with virtual reality.

So far it’s just a side project (and a silly-sounding one at that), but Greenwood and Evans can envision it being developed for entertainment, scuba-diving simulations, or physical therapy. Virtual reality is still in its infancy as a consumer product, and beyond a smattering of games, films, and applications it’s still not clear how we’ll use it; they see this as one option for making VR feel much more captivating than it typically does.

“I think there’s a little more of a suspension of disbelief when you’re in a radically different environment,” Greenwood said. “When you don’t have a sense of the ground or gravity or what’s up or what’s down, it makes it that much more believable.”

Their underwater VR gear is nothing more than a rudimentary prototype, but it does work. The computer and display come from a waterproof Android smartphone, which is attached to a 3-D-printed block of plastic that acts as a spacer between the handset and a snorkeling mask. The mask, covered in black tape to keep light from leaking in, has two biconvex lenses—like the ones you’d find in the simple, handheld Google Cardboard—glued to the inside. A plain old snorkel lets you breathe, and audio comes from a Finis underwater MP3 player that uses bone conduction to transmit sound.

They’ve been trying it out at Greenwood’s apartment building, which has a pool (a rarity in San Francisco). On a sunny, chilly afternoon this month, I jumped in and tried it out myself.

The first experience had me floating above the International Space Station while David Bowie’s “Space Oddity” played on a loop. I found that I didn’t want to do much moving; it was relaxing to just hang, suspended in the water (though the visuals made it feel more like outer space), occasionally twisting around to see what was behind, above, or below.

After I’d spent some time checking out the ISS—minutes, probably, but it was hard to tell how much time passed—Greenwood switched to another VR experience that was a little closer to my reality: an underwater scene with colorful fish, peppy jazz music playing in the background. Hanging out with the fish was a little more fun, despite the fact that water started seeping into the snorkel mask as I swam in circles to investigate the world around me.

I quickly realized that the headset is about as advanced as Google Cardboard at this point. There’s head orientation tracking, but no tracking of your head’s position in space. This means you can turn around to look at different things, but your view of the virtual world through the goggles doesn’t change as you swim around.

This is especially weird if you’re making an effort to swim in one direction, as I did while checking out the fish, because the visuals make you feel as if you’re not actually moving even as your arms and legs are flailing. And it means you have no way to know if you’re about to smack into the side of the pool (Greenwood served as my spotter from the pool deck, but every time I touched the rough walls of the pool the spell was momentarily broken).

In hopes of improving this, Greenwood said, he and Evans are working on building a positional tracking system that communicates with the phone in the headset and can work underwater; lights and cameras, which can be used on terra firma, don’t work so well in that setting. He won’t give specifics beyond saying it involves sound and magnetics to calculate depth.

Despite the simplicity of the setup, however, it was easy to forget about the outside world and just enjoy the weird virtual one below the surface. I didn’t stay down there too long—the day was ending and the pool was getting cold—but I’d like to go back soon. 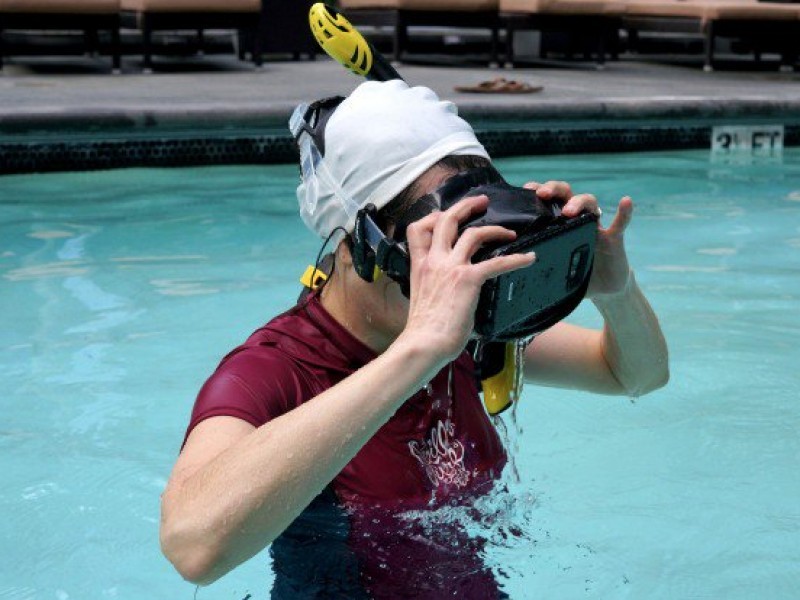